3. Attribute Data (What): The attribute data are typically multivariate with a mix of measurement metrics that are seldom continuous.

Each of these information types represent data spaces that are characterized by different metrics. These data spaces do not share a common metric and therefore they can’t be easily transformed into a comparable form. Traditionally they were analyzed separately.

Space-Time-Attribute analysis is fairly a simple analysis. By searching all locations, time and attributes, its is possible to overcome our ignorance of not knowing where to look. In other words, by analyzing these spaces together, we wil to identify a pattern.

Many consider this to be earliest documented use of maps. On 31 August 1854, there was a severe cholera outbreak in Soho district of London, England. A physician named John Snow was a sceptic of the then-dominant theory that stated that the disease such as cholera were caused by pollution. By talking to local residents, he identified the source of the outbreak as the public water pump on Broad Street.

Snow used some proto-GIS methods to buttress his argument: first he drew Thiessen polygons around the wells, defining straight-line least-distance service areas for each. A large majority of the cholera deaths fell within the Thiessen polygon surrounding the Broad Street pump, and a large portion of the remaining deaths were on the Broad Street side of the polygon surrounding the bad-tasting Carnaby Street well. Next, using a pencil and string, Snow redrew the service area polygons to reflect shortest routes along streets to wells. An even larger proportion of the cholera deaths fell within the shortest-travel-distance area around the Broad Street pump. 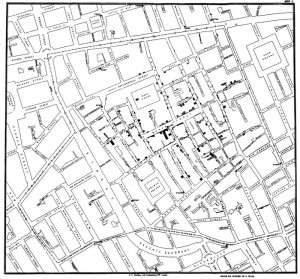 Here is the animation of the same map projecting the number of deaths over time on a map.

Looking at the animation, we can see that, all three spaces were analyzed to identify a pattern. First, there is a geography space on which we project the scale of the event, second there is a time space (please see the dates on the top of the map) and finally there is an attribute which is the number of deaths.

Imagine how difficult it is to solve this problem with out a visualization platform like this map.

Step 2: Select an observed data with a profile of g, t and a spaces.

Step 5: Define an attribute search region centered on the observed case and distance radius ar where (a1 < ar < an).

Step 6: Scan through the database to find those records that lie within these critical regions. Abort the search if fewer than a minimum number of records are found.

Step 7: Use a Monte Carlo significance test procedure to determine the probability of a test statistic for any search occurring under a null hypothesis

Step 8: Keep the record identifier and the search parameter if the probability is sufficiently small

Step 9: Examine all combinations of g, t, and a search parameters.

Step 10: Report the results if a sufficient number of the results pass the stated significance level.

Is google self-driving car, a version of space-time-attribute analysis algorithm?

Space (road), time (car speed is a function of speed which is distance and time), attribute (In this case there are multiple attributes such as signals, roads, pedestrians. etc).

May be, but it’s much more complex:

a. There are many attributes.

b. While on the road, the computer must identify the type of the attribute without error as each attribute has different property and behavior.

One must be aware of the property of the attribute while trying to identify a pattern from it.

In the book “Fooled by Randomness“, the author gives an example of how data mining might lead us to misleading results.

Consider a square with 16 random darts hitting it with equal probability of being at any place in the square. If we divide the square into 16 smaller squares, it is expected that each smaller square will contain one dart on average, but only on average. There is a very small probability of having 16 darts in 16 different squares. The average grid will have more than one dart in a few squares, and no dart at all in many squares. It will be an exceptionally rare incident that no cluster would show on the grid.

So, Though the random events might help determine what has worked in the past, the same rules may not apply to predict the future.

In other words, we humans tend to see patterns when, in fact, the results are completely random.